2 EBITDA was calculated based on operating revenues minus operating expenses plus depreciation and amortisation. As the telecommunications business is a capital intensive industry, capital expenditure, the level of gearing and finance costs may have a significant impact on the net profit of companies with similar operating results. Therefore, we believe EBITDA may be helpful in analysing the operating results of a telecommunications service provider such as the Company. Although EBITDA has been widely applied in the global telecommunications industry as a benchmark to reflect operating performance, debt raising ability and liquidity, it is not regarded as a measure of operating performance and liquidity under generally accepted accounting principles. It also does not represent net cash from operating activities. In addition, our EBITDA may not be comparable to similar indicators provided by other companies.

3 EBITDA margin was calculated based on EBITDA divided by service revenues.

The following table sets forth a breakdown of the operating revenues for 2015 and 2016, together with their respective rates of change:

The Company continued to optimise the allocation of resources and strengthened the precision management of costs and expenses in order to effectively support the business development. In 2016, the operating expenses were RMB325,084 million, an increase of 6.7% from 2015. Operating expenses accounted for 92.3% of operating revenues, an increase of 0.3 percentage point from 2015.

The following table sets forth a breakdown of the operating expenses in 2015 and 2016 and their respective rates of change:

In 2016, network operations and support expenses were RMB94,092 million, an increase of 15.8% from 2015, accounting for 26.7% of operating revenues. The growth was mainly due to the increase in the tower assets lease fee and related expenses. At the same time, the Company continuously strengthened cost management and control and the growth rate of network operations and support expenses was lower than that in the same period of last year.

In 2016, personnel expenses were RMB54,460 million, an increase of 3.7% from 2015, accounting for 15.5% of operating revenues. For details of the number of employees, remuneration policies and training schemes, please refer to the Environmental, Social and Governance Report in this annual report.

In 2016, net finance costs were RMB3,235 million, a decrease of 24.3% from 2015. The decrease was mainly due to the fact that the interest rate of the deferred consideration of Mobile Network Acquisition decreased from 5.11% per annum in 2015 to 4.00% per annum in 2016 (adjusted in accordance with a 5 basis points premium to the yield of the 5-year super AAA rated Medium Term Notes once a year pursuant to the agreement). Net exchange gains were RMB113 million in 2016. The fluctuation of foreign exchange gain or loss was mainly due to the depreciation of the RMB exchange rate against the US Dollar.

Profit Attributable to Equity Holders of the Company 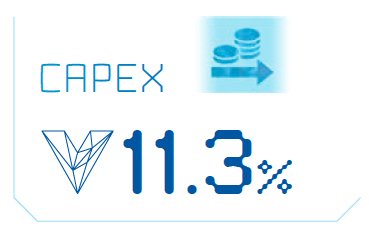 The following table sets forth the cash flow position in 2015 and 2016:

In 2016, the net cash outflow used in investing activities was RMB99,038 million, a decrease of 3.1% from 2015, which was mainly due to the decrease of capital expenditure for the year.

The Company consistently upheld prudent financial principles and strict fund management policies. At the end of 2016, working capital (total current assets minus total current liabilities) deficit was RMB245,026 million, an increase in deficit of RMB67,205 million from RMB177,821 million in 2015. The deficit increased because the deferred consideration of RMB61,710 million for the Mobile Network Acquisition will become due at the end of 2017 and was reclassified as current liabilities. As at 31 December 2016, the unutilised credit facilities were RMB161,229 million (2015: RMB128,839 million). Given the stable net cash inflow from operating activities and the sound credit record, the Company has sufficient working capital to satisfy the operation requirement. At the end of 2016, cash and cash equivalents amounted to RMB24,617 million, amongst which cash and cash equivalents denominated in Renminbi accounted for 81.8% (2015: 92.6%).

As at 31 December 2016, neither the Company and any of its subsidiaries pledge any assets as collateral for debt (2015: Nil).

Most of the revenues received and expenses paid in our business were denominated in Renminbi, therefore there were no significant risk exposures arising from foreign exchange fluctuations.

In 2016, the Company held 27.9% of China Tower Corporation Limited (“China Tower”). Please refer to note 9 of the audited consolidated financial statements for its financial performance during the year. In the future, the Company can enjoy more fundamental network resources through China Tower. As one of the shareholders of China Tower, it is expected that we can benefit from the enhancement of profits and values from China Tower.

Your page has been added successfully.